Click Here For Information On Our Census Response Program
info@advocacydata.com 202.412.6616 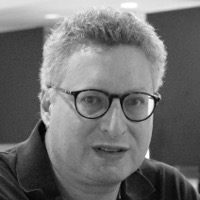 Roger Alan Stone is a political Internet pioneer, innovator and entrepreneur.   Working in politics and advocacy since the mid 80s and in the political Internet since 1998. He’s combined his knowledge of the practical needs of campaigns with cutting edge technology to invent many of the techniques used throughout now throughout our industry.

After working on seventeen elections in fourteen states, as well as on the Hill for two Representatives and a Senator he’d helped elect, Roger went to Law School at Columbia, clerked for the DC Court of Appeals and was an associate at James and Hoffman, specializing election law, non-profit organizations and unions and lobbying for the Federal Law Enforcement Officers Ass and DE Shaw & Co.

Through this work, he was acquainted with the founders of Juno Online Services and realized that as one of the first Internet companies with the ability to geo-target, they could have the first product that could target specific states and Congressional Districts and generate grassroots emails to Congress.  So Roger joined Juno as a Vice President and founded the Juno Advocacy Network in 1998.  At JAN he pioneered techniques like using online petitions and surveys for list building and activist recruitment.  Campaigns and Elections Magazine named Roger a Rising Star of American Politics in 2000 for this work.

By 2002 there were a number of ways to reach voters and constituents online, so to better serve his clients, Roger founded Advocacy Inc. to provided data, online advertising and consulting services.   Advocacy Data pioneered matching voter files for email addresses, doing the first national match of the voter file in 2003, as well as being the first to provide Members of Congress with emails for official communication. The AAPC recognized Advocacy Inc. and Roger’s work on the first political online video advertising with a Pollie Award.

In 2010 Roger founded Advocacy Data to better serve the clients – many of whom were consultants and didn’t want to purchase data from a firm that also did consulting.

Campaigns & Elections Campaign Success Right from Your Desktop: The Value of Targeted Email 10/27/2010

The National Journal How Much Should Candidates Court The Web? A Recent Suggestion From Newt Gingrich Probably Aims Too High, Ad Buyers Say 11/7/2010

Campaigns and Elections Staying Up To Date: Tips On How To Use VoIP 7/2006 p56

The Washington Post Consultants Deliver Politics To Voters’ Inboxes, at a Price 8/29/2004

PR Week ANALYSIS: Political PR – Advocacy groups use Internet to advantage Advocacy groups have realized sooner than corporations that the Web is the place to go when it comes to rallying support 1/8/2001

The Economist Political campaigns online. Beyond the law’s reach? 12/9/1999

Founded the Juno Advocacy Network (JAN) First online ad network only for politics and advocacy First targeting of Congressional Districts for politics and Advocacy Awarded U.S. Patent #6,311,211 for JAN being the first to use of the Internet to lobby Congress, build lists, etc

First Use of Online Petition Forms to List Building First Online Campaign to Generate 100,000 plus responses in a day to the White House

First Use of Online Video in a Political Internet Ad, for which he received the AAPC’s Pollie Award

First National Match of US Voter File for Emails